End of Summer Kratom Clones – How to Root Kratom

End of Summer Kratom Clones – How to Root Kratom – Here is a guide from one of our mods on Kratom Watchdog. You can find the original guide here.

Picked up a Super Sprouter propagation kit last month and started a new batch of clones.

Pretty much the same technique I’ve been using – Start with a healthy tip. 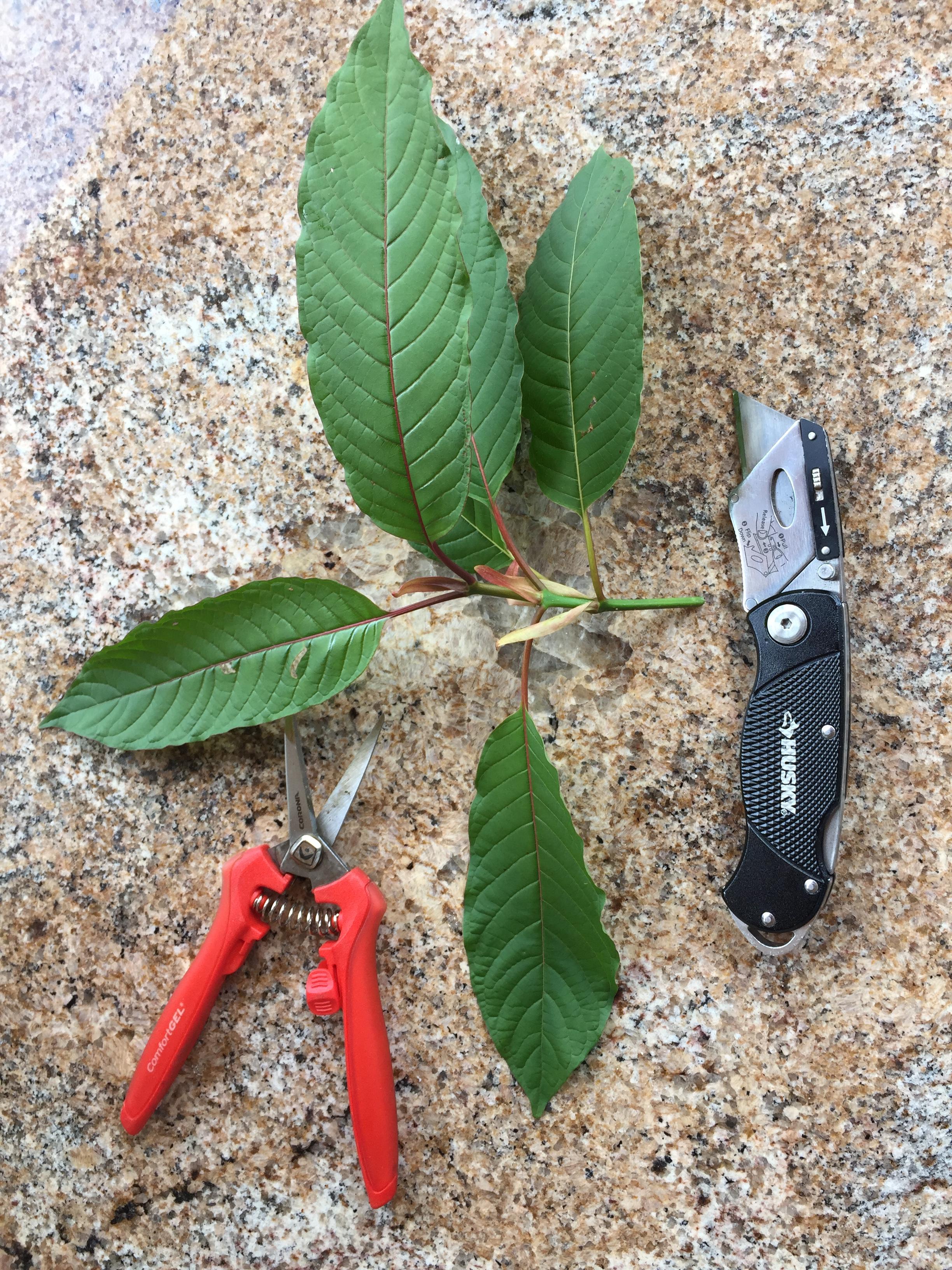 Strip off all the leaves except the top two and snip most of those to reduce transpiration. Then make a clean 45 degree cut below the bottom node. 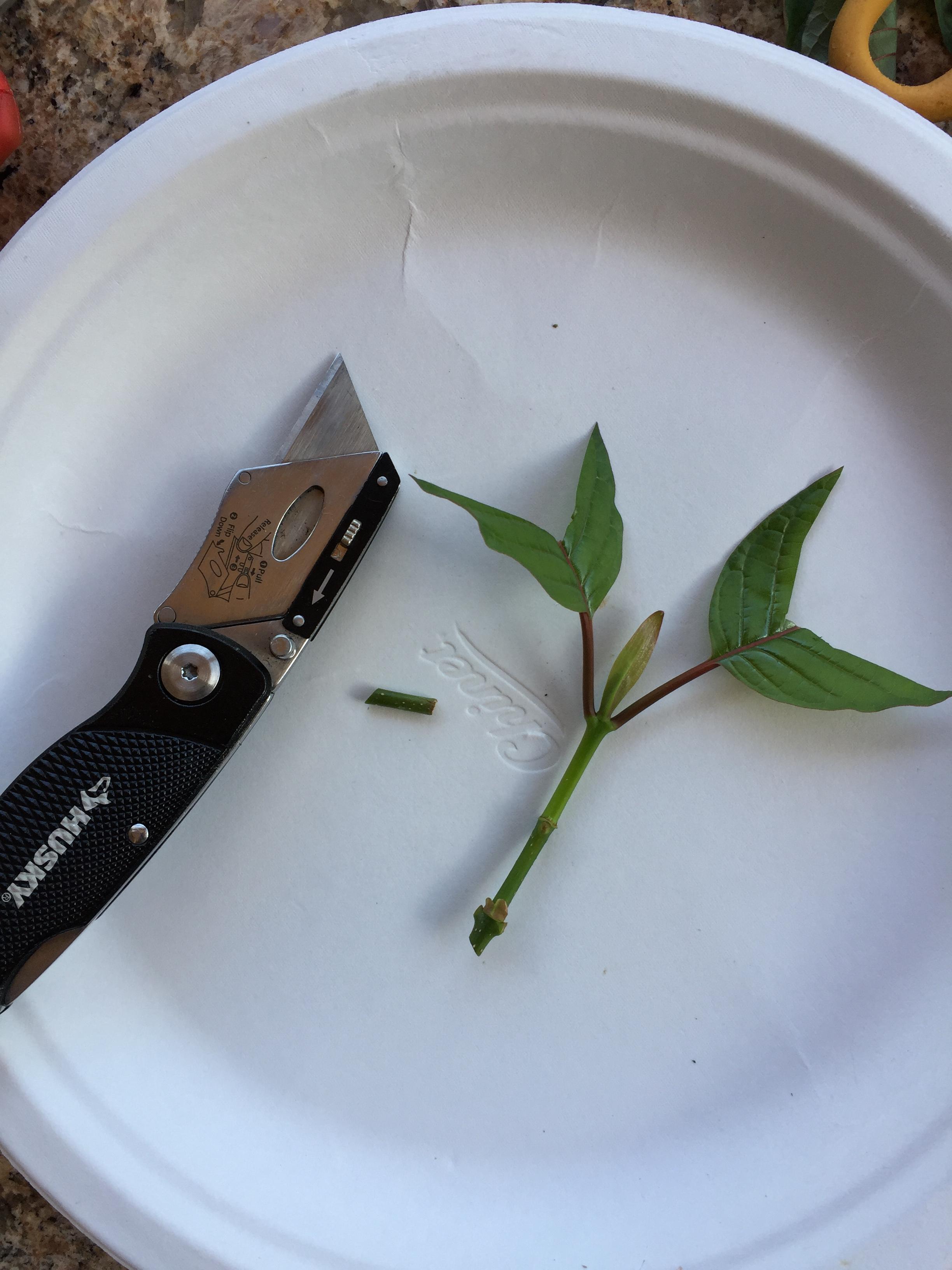 End of Summer Kratom Clones – how to root Kratom

Dip the stem in rooting hormone. I prefer the gel type over the powdered ones, seems to stick better. 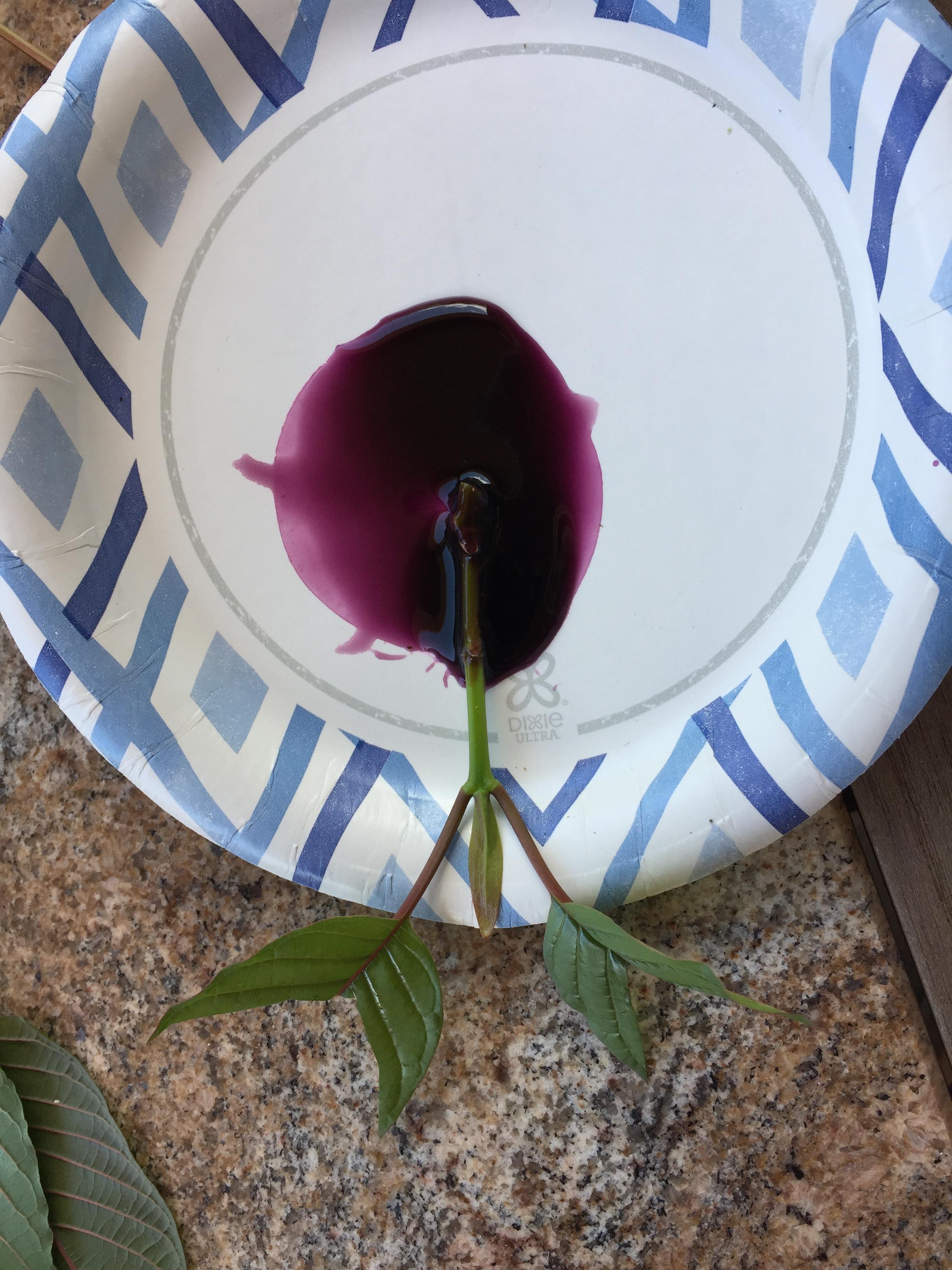 End of Summer Kratom Clones – How to Root Kratom

And then carefully push the stem into the growing medium. I used peat plugs that were soaked in water that was pH’ed to around 5.5 and had a little SuperThrive added. 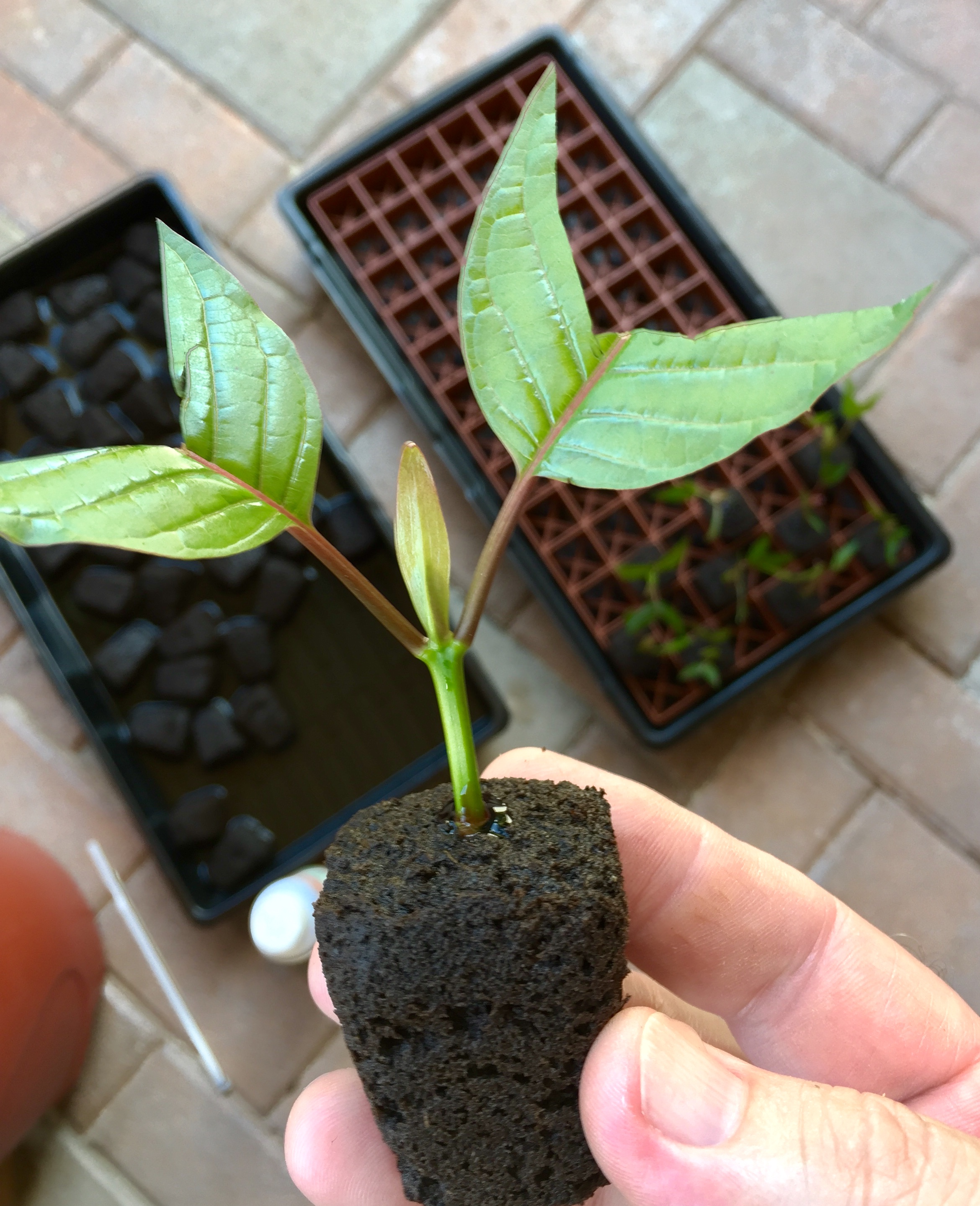 This year I kept them inside where the temperature stayed right around 80 degrees under the dome, and kept the light that came with the propagation kit on 24×7. Also made sure that the plugs stayed moist, but not sitting in water. Humidity mostly stayed in the 90’s. 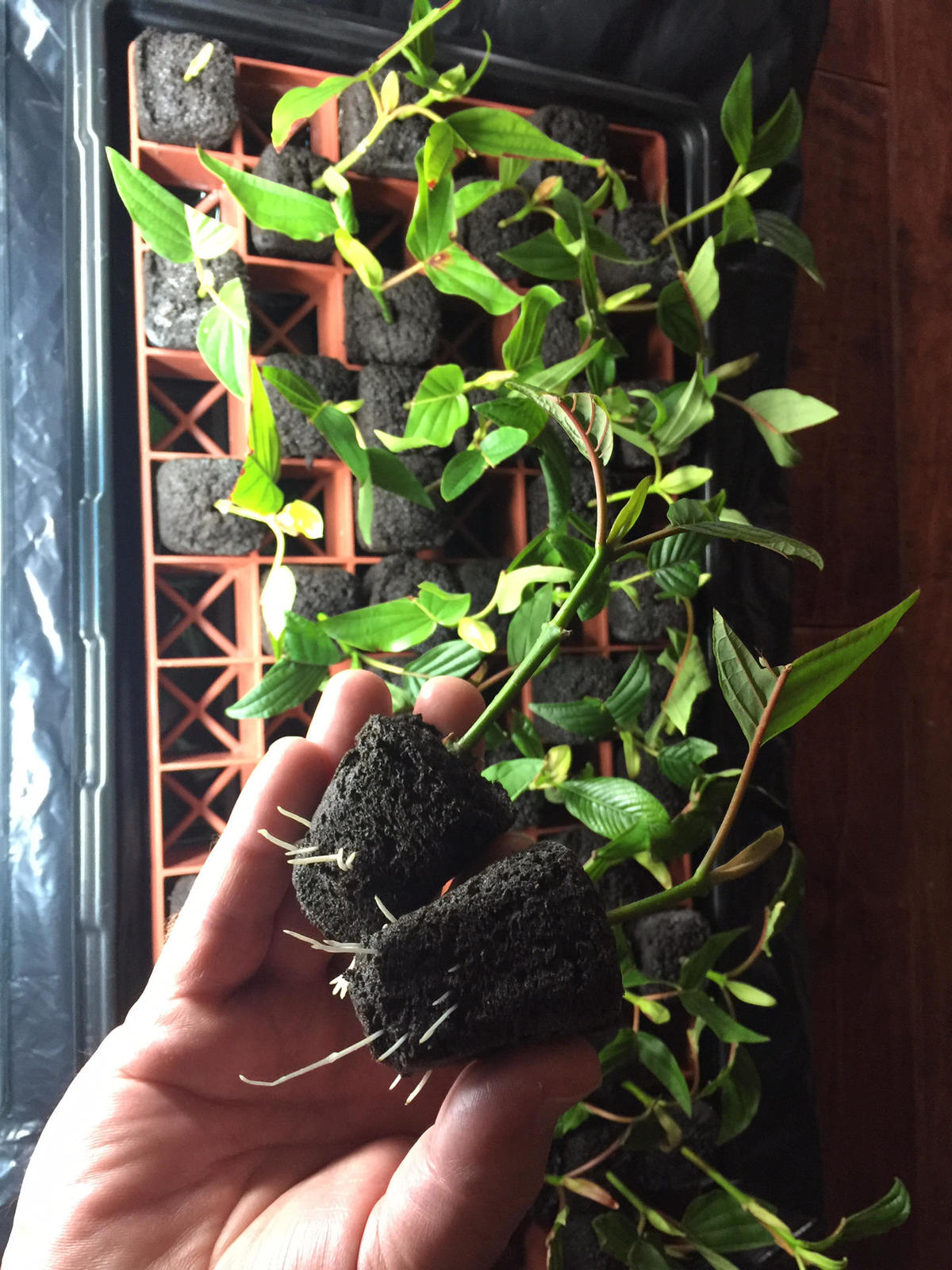 Over the next few weeks I’d move the ones with roots into small pots filled with perlite and Fox Farms Ocean Forest soil. 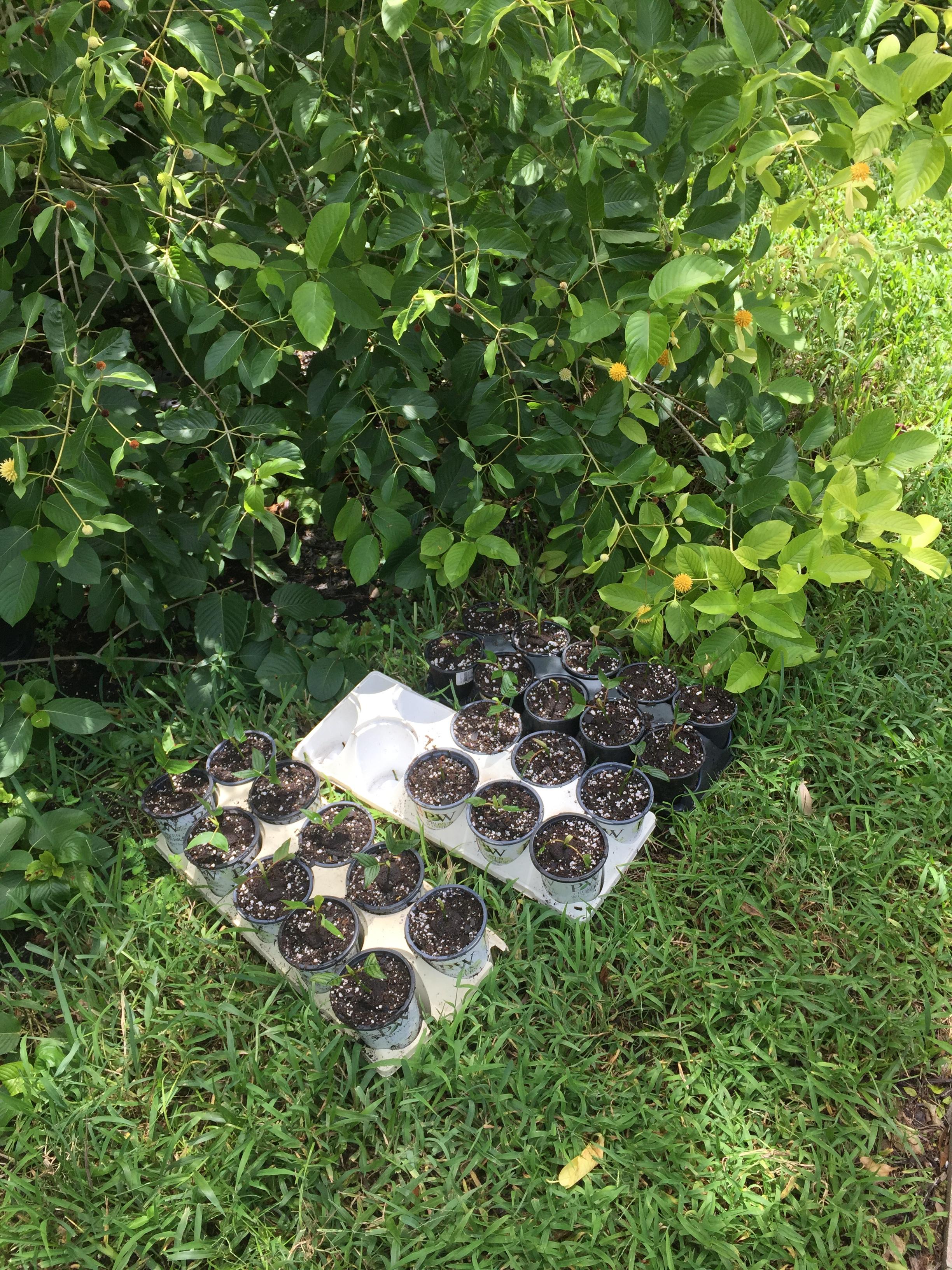 We’ve had torrential rain in South Florida and I lost a few to rot. Next time I’ll keep them covered until they get bigger. Probably end up with about half of what I started with. 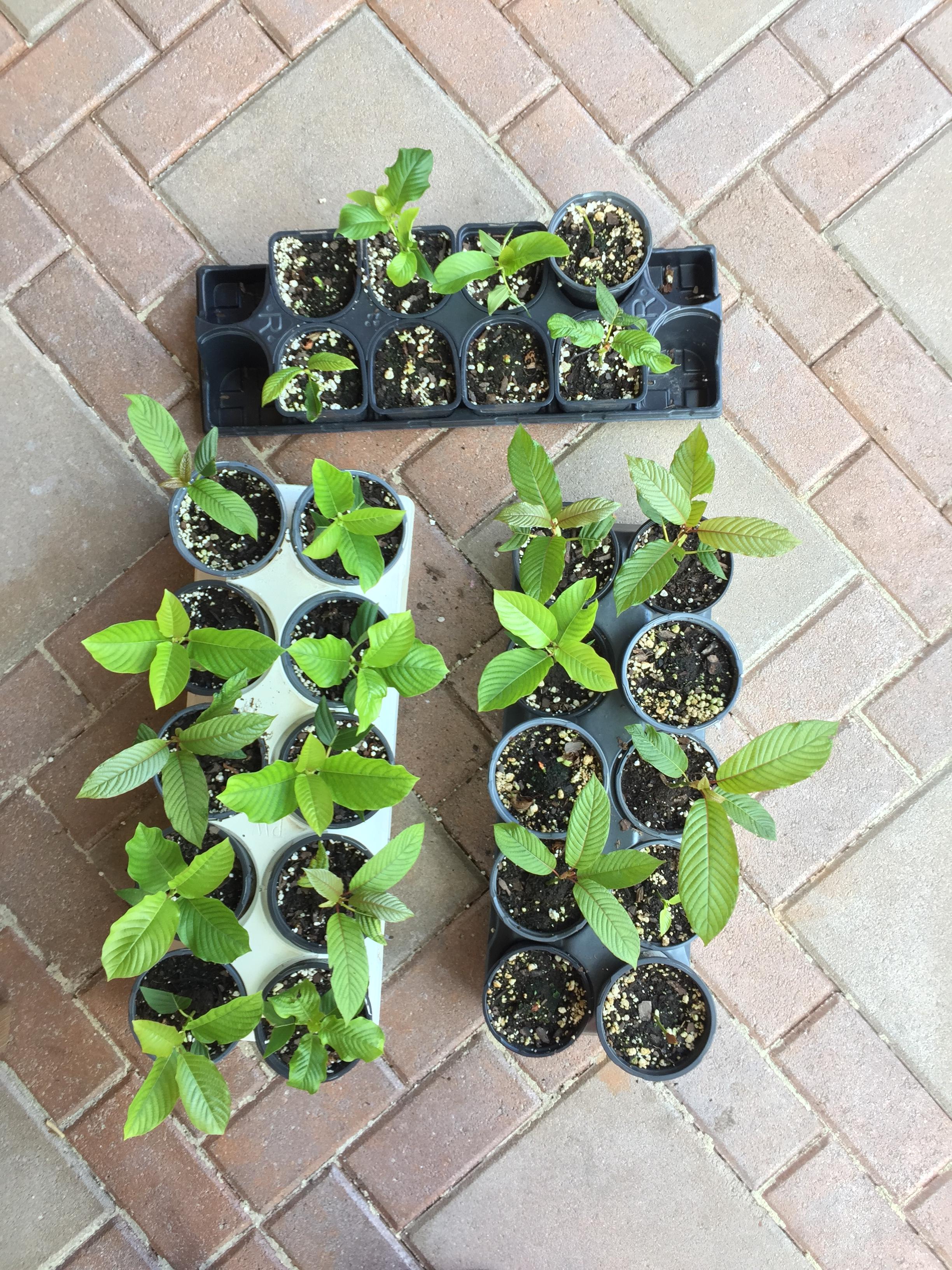 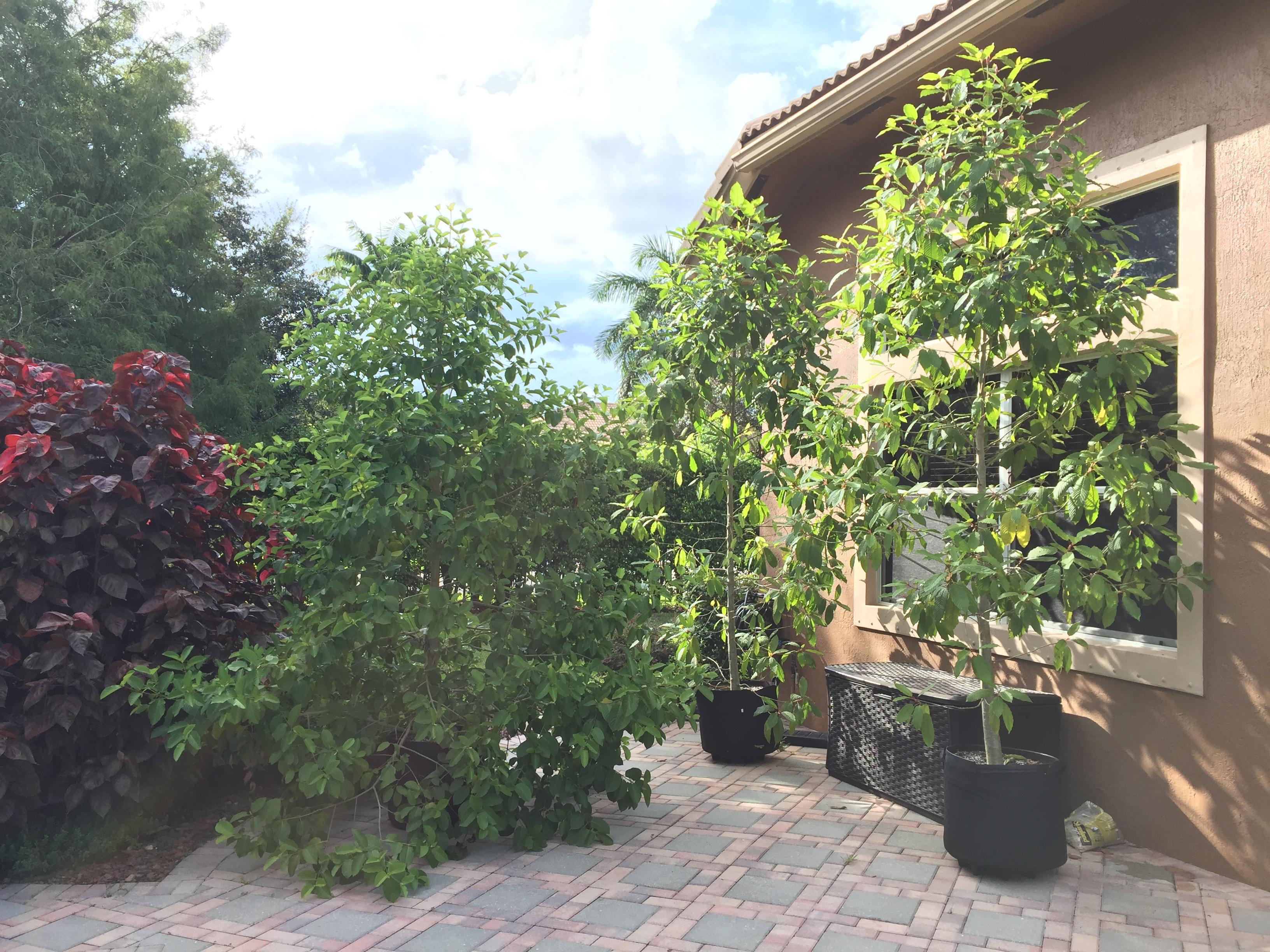 And the rest are from my two year old Rifat that’s just finishing up flowering. 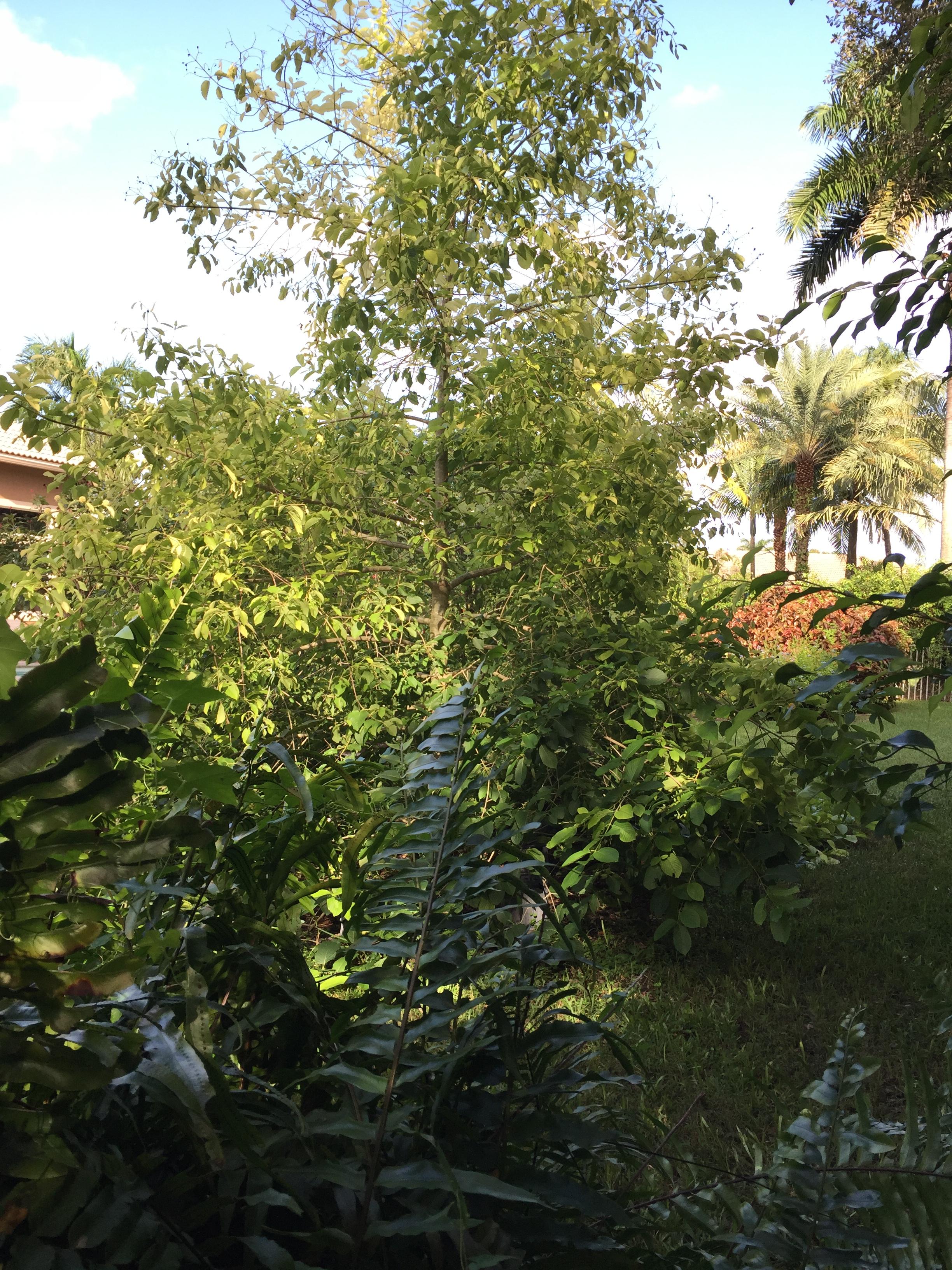 Now comes the hard part, figuring out what to do with them. 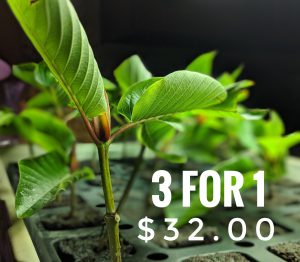 Picking 10ft kratom tree before transport- We are picking this 2 year old 10ft tall kratom tree before we transport it. We do this so that the leaf does not get damaged during transport. 40mph winds can damage kratom leaf. It is best to wrap them up if you can. You can see us drive the tree here: https://www.youtube.com/watch?v=zC6HwWBL2os&t=1s and you can see the tree vertical where I failed to move it here: https://www.youtube.com/watch?v=V70Iv9xrNR4&t=3s . This tree is one of 3 that we have to move and I will post the other moves when I film them. Thank you to Joshua for helping me out. 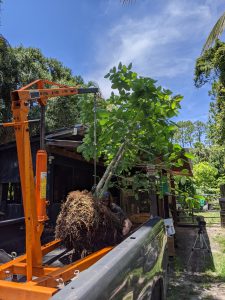 kratom tree being held by a engine lift 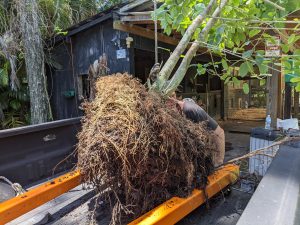 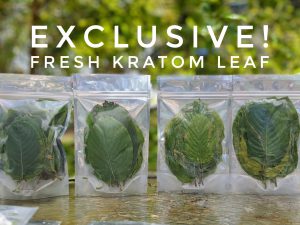 A review from kyle

Red indo Message Body: Just wanted to leave a review for the red indo. First time ordering from these guys, but it won’t be the last! Ordered 250g to try out. Shipping was crazy fast and the product is awesome. Can’t wait to place future orders with yall! I’ll recommend this site to anybody even remotely interested in kratom. I also got the little leaf keychain and I friggen love it. Thank you for affordable, quality kratom powder!! 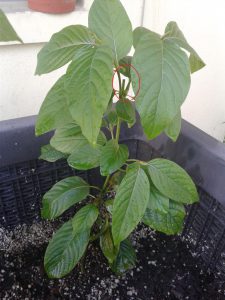 Picking up a Kratom tree from Peteypyro – Thank you very much to one of our mods (peteypyro) on the Kratom Watchdog Android and IOS app. He is a awesome person and we thank him for his donation to the nursery. I’m currently working on putting together a vlog of the trip. Join us on the only free and open discussion #kratomapp #Kratom Watchdog. Built by one of the founders of the non for profit American Kratom Association (AKA). https://kratomapp.us/ 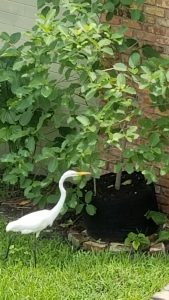 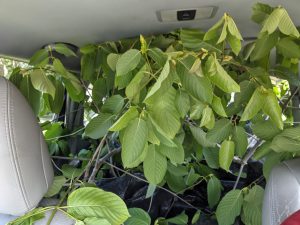 Where is Thai Kratom Harvested From?

Where is our Thai Kratom Harvested From?

Made from Thailand’s most mature Kratom leaves, Red Thai Kratom is one of our most popular strains. As its name suggests, the Thai kratom strain is imported directly from Thailand, although it is often grown in other areas across Southeast Asia. Our Red Thai kratom powder is: 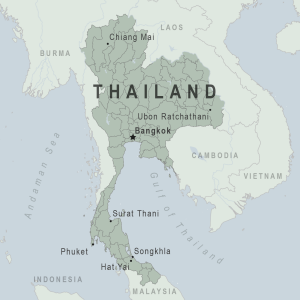 The Importance Of Quality Kratom

The Importance Of Quality Kratom

The production of kratom involves thousands of farmers, encompasses dozens of strains, and spans over several distinct regions. And although kratom has deep roots in the history of the world, it’s uncertain where the future of the plant may be headed.

However, one thing is for sure –– choosing quality kratom is essential.

At Kratomleaf.us , we’re proud to provide our customers with ethically sourced, premium-grade mitragyna speciosa powder. After importing our kratom directly from Southeast Asia, we utilize strict laboratory testing methods to ensure our highest standards of purity are met. All of our products are sealed air-tight to preserve freshness and maximize customer satisfaction.

We’ve delved into how kratom is made –– but where does it come from?

Although kratom can be grown outside of its indigenous home of Southeast Asia, the vast majority of the supply circulating within the US and elsewhere is imported from Southeast Asian countries.

Indonesia is perhaps home to the highest volume of mitragyna speciosa powder production and exportation. Unlike other Southeast Asian countries, kratom has not been deemed an illicit substance within Indonesian borders, which has popularized kratom farming efforts. A significant amount of kratom is sourced from Indonesian provinces such as West Kalimantan on the island of Borneo.

Supposedly, farmers located in other neighboring regions such as Malaysia and even Thailand also play a role in how kratom is made, although kratom is a controlled substance in both countries. In Thailand, kratom was deemed illegal to buy, sell, import, or possess in 1979. However, despite regulation efforts, kratom has maintained its popularity and remains Thailand’s most widely consumed substance.

The Roots of Kratom

The Roots of Kratom

Mitragyna speciosa powder begins with the mitragyna speciosa tree, a plant native to Southeast Asian countries including Indonesia, Thailand, and Malaysia. Indigenous populations in these areas have been growing and harvesting kratom for centuries, and the earliest reports of kratom consumption in Malaysia date back as far as 1836 according to Burkill.

The plant’s environment is a significant factor in how kratom is made. At maturity, the mitragyna speciosa tree can grow as tall as 80 feet in ideal conditions. Its leaves have a shiny, dark green coloration and are quite large, with most full-grown leaves dwarfing the size of an average human hand. Because the kratom plant is evergreen, its leaves quickly regrow when shed, making kratom production possible year-round.

Kratom grows best in warm, humid environments where sunlight is plentiful. As such, the plant is abundant in rain forested areas such as the tropical island of Borneo.

I was told this tree was about 2 years old but I am highly skeptical only because it looks more like a 5 year old tree. Although it is possible. Martha was the previous owner of these trees and she said that she bought them from My trees of life. Thankfully Josh helped us out with his truck and engine lift. Without the engine lift we would not have gotten it into the tuck. The tree ripped apart both our my shoes and will have to be replaced. took us from 10 am to 4 pm to get it moved and planted at the kratom nursery. You can see I tried my best to move it before but it was way to heavy. There are 2 other trees I need to pick up 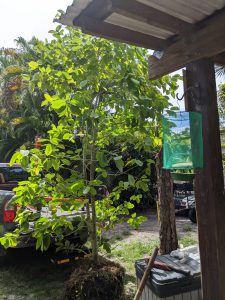 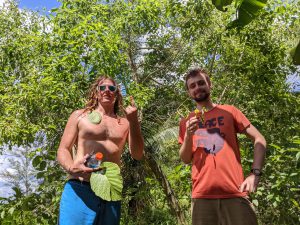 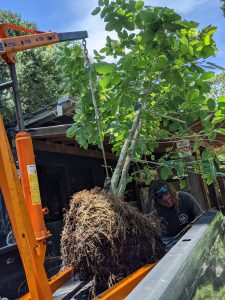 The products sold by CincoTech LLC DBA KratomLeaf are not intended for sale or use by persons under the age of 21. Kratom and any statements made on this site have not been evaluated or approved by the Food and Drug Administration (FDA). The products sold by CincoTech LLC are not meant to diagnose, treat, cure or prevent any disease or health condition. Please consult your health care professional before using any of our products.

We need your help. American Grown Kratom is under attack. Dismiss